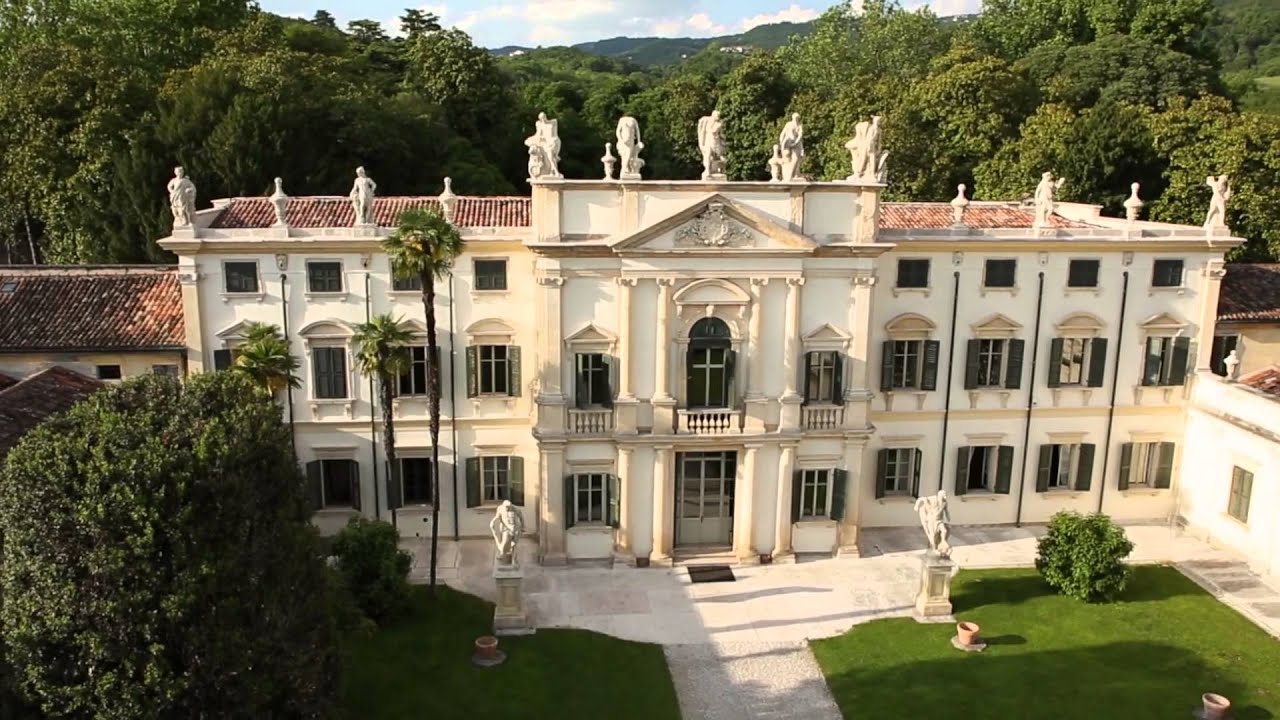 This is a sample itinerary of a recent tour. Join our mailing list to stay in touch about future tours.

Discover the art, wine and gastronomy of northern Italy with this enchanting tour based at a luxury 5-star villa. The award-winning boutique hotel is surrounded by the famous vineyards of Valpolicella and produces its own wines which we will sample during the week. We use this delightful countryside retreat as a base to explore the local area, with a day trip to Mantua where we discover the treasures on display in the Ducal Palace including Mantegna’s delightful Camera degli Sposi frescoes, the Basilica of Sant’Andrea and the Palazzo del Te, a pleasure palace designed by Giulio Romano for Federico Gonzaga.  We enjoy a private opening of the magnificent Villa Mosconi Bertani (see above) with an exclusive private concert and dinner in its exquisitely frescoed Salon of the Muses, accompanied by the property’s famous Amarone and Valpolicella wines. We spend time exploring Palladian villas (including some not open to the public) with day trips to nearby Vicenza, Verona and Padua. A highlight will be a private visit to the Villa Valmarana, famous for its frescoes by Giambattista and Giandomenico Tiepolo, where we enjoy a tour and lunch hosted by Countess Carolina Valmarana.

The region is full of artistic treasures and we will follow in the footsteps of artists such as Giotto, Veronese, Pisanello and Mantegna, exploring exquisite works which remain in the places for which they were commissioned.  As always, the holiday will be accompanied by excellent dinners in beautiful locations, as well as a number of private wine-tastings in some of the region’s most spectacular locations, including the award-winning Zyme estate, one of the most renowned wine cellars of Valpolicella.

There will also be a specially arranged study day in London the week before we travel, giving us an opportunity to meet other members of the group and learn more about the artists whose work we will encounter during the tour.

For those who are able to come, there will be an introductory late morning study tour in London before we depart, giving us an opportunity to meet other members of the group and explore works by artists such as Veronese, Giotto and Tiepolo whose work we will see in Italy. The tour will last approximately 1½ hours and a light lunch is arranged for those who would like to join the group. Further details will be given a little nearer the time.

We depart from Gatwick and fly to Verona airport where a private coach will take us to our 5-star luxury boutique hotel, situated in the heart of Valpolicella vineyards. An antique villa and National Monument, this award-winning hotel has a fascinating history, having served as a castle for powerful medieval lords as well as an elegant home for prosperous Venetian merchants. It boasts stylish Renaissance interiors and antique furnishings and is surrounded by beautiful private gardens, a large outdoor swimming pool and the hotel’s own vineyards.

After some time to relax and perhaps enjoy a light lunch by the pool we visit the nearby world-famous Zýmē vineyard which produces some of the finest wines in Italy’s Valpolicella region. The winery is characterised by a fascinating combination of tradition and innovation thanks in part to its recent striking transformation by contemporary architect Moreno Zurlo. We will taste a number of wines from traditional favourites such as Amarone (Decanter World Wine Award 2019: silver medal) to innovative new wines such as Kairos (Decanter World Wine Award 2018: bronze medal)

After some time to relax, a gourmet dinner with wine (included) is served at the hotel.

After breakfast we spend the day exploring the nearby beautiful city of Verona, where our visits include the fine Romanesque church of San Zeno with its magnificent bronze doors and its altarpiece by Andrea Mantegna, and the church of Sant’Anastasia with its famous fresco of St George by Pisanello and a fine monument attributed to Andrew Palladio.   A light lunch is arranged for those who would like to join the group in the Piazza Bra, where the famous Roman amphitheatre is situated. The third largest in the world, the arena attracts music lovers from all over the world during the annual Opera Festival. We have also arranged a private guided tour of one of Verona’s hidden gems, the Giusti Gardens. Featuring formal  parterres,  sculptures and beautiful views from the terraces,  they are  considered  today some  of  the  most  beautiful  Renaissance gardens  in  Europe.  We will also have an opportunity to enjoy the family collection of furniture, paintings and decorative arts.

We return to the hotel to rest and this evening enjoy a private opening of the magnificent nearby Villa Mosconi Bertani (see above), built in the 18th century and decorated with beautiful trompe l’oeil paintings. After an aperitivo in front of the villa we enjoy an exclusive private concert and dinner (included) in the exquisitely frescoed Salon of the Muses, accompanied by the property’s world-famous Amarone and Valpolicella wines. The recital will be given by the Mandolin Venice Ensemble, a chamber group dedicated to performing classical and traditional Italian music especially from the Veneto region.

Today we visit nearby Mantua, which was ruled for 300 years by the Gonzaga family. This important dynasty commissioned works by the greatest artists, architects and musicians of their day, from Titian and Leonardo to Rubens and Monteverdi. We discover the many treasures on display in the Ducal Palace including the exquisite Camera degli Sposi, decorated with frescoes by Mantegna depicting Ludovico Gonzaga and his family, and then take a short walk through the charming city centre. After lunch (optional) in one of medieval squares, we will admire the facade of the Basilica of Sant’Andrea designed by Alberti and then visit the delightful Palazzo del Te, a pleasure palace designed by Giulio Romano in the 1520s for Federico Gonzaga and his mistress

Dinner has been arranged (optional) at an excellent family-run restaurant in Verona for those who would like to join the group.

We depart for Vicenza, the city of Andrea Palladio who became the most influential architect of his generation. First we stop at the beautiful, classically inspired Villa Rotunda for an exclusive private opening of the interior and exterior on a day when it is closed to the public. We will be welcomed by the owner Count Niccolo Valmarana, descendant of one of the oldest families in Venice whose family acquired the property over 100 years ago and have brought this Palladian masterpiece back to life once more. Afterwards we enjoy another private opening, the Villa Valmarana ai  Nani, famous for its magnificent and playful frescoes by father and son team, Giambattista and Giandomenico Tiepolo. These were commissioned in the 18th century by Giustino Valmarana. His descendants still live in the property and we will be welcomed by Countess  Carolina  Valmarana who will give us a guided tour of the villa and then join us for a delicious lunch (included) beneath the Tiepolo paintings.

This afternoon we visit Palladio’s last commission, the Teatro Olimpico, based on classical models and boasting impressive stage sets designed by his pupil Scamozzi. We then stroll into the centre of town towards the Piazza dei Signori where further buildings by Palladio dominate the square, such as the green-roofed Basilica covering Vicenza’s town hall.  This evening we have a chance to taste some of the wines produced by the hotel’s vineyard during a specially arranged private wine tasting in the hotel’s evocative Roman cellars. The tasting is accompanied by light snacks.  Dinner this evening is independent.

Today we drive to Padua where our visits include the Basilica di Sant’Antonio known as Il Santo, built to house the relics of Saint Anthony of Padua whose miracles are recorded on Donatello’s superb sculpted reliefs on the high altar.  We will also see some wonderful little-known early frescoes by Titian next door (private opening), and then stroll towards Palazzo della Ragione, the town’s medieval law court, which is surrounded by loggias which shelter shops, restaurants and cafes.

After a light lunch (optional) we have reservations to see Giotto’s magnificent frescoes which cover the walls of the Scrovegni Chapel. Dedicated to the Virgin Mary, the chapel was commissioned by a local merchant Enrico Scrovegni to atone for the sins of his father, and the patron himself appears prominently in an act of dedication on the west wall. A specially arranged ticket will allow us to spend extra time in the chapel.  En route home we stop for a short private visit of Andrea Palladio’s Villa Trissino.  Dinner with wine (included) is served at the hotel this evening.

After some time for relaxation at the villa we depart for nearby Verona airport where our flight returns to London.

5 nights’ accommodation including breakfast in a luxury 5-star boutique hotel. Rooms in the superior category have been reserved. Outside there is a swimming pool surrounded by a large private garden and the hotel’s own vineyards. There is a gourmet restaurant as well as more informal choices.  The hotel is situated in a peaceful rural location yet within easy access of all the towns, villas and vineyards on our itinerary.

I will lead guided tours on all days, giving you some free time too (please feel free to join the group or be independent). A detailed, confirmed itinerary will be provided nearer the time and all reservations made where necessary. Please note that flight times may be subject to alteration. All will be done to ensure that the details of the trip remain as indicated, but museums and churches may close without warning, and if this happens I will always make every effort to organise alternative arrangements. I will always suggest good places for lunch and dinner, so we can either eat together as a group or you can be independent – it’s up to you.

Please note that there is a fair amount of walking involved in the trip, although at a gentle pace and not strenuous. There will be regular coffee stops and breaks during each day, and the use of headsets for guiding allows you to sit down when listening to your lecturer’s commentaries, wherever seats are available.

The price includes scheduled flights and taxes; 5-star hotel accommodation for 5 nights, city taxes and breakfast; transfers and excursions by private coach; fully guided tours; a number of specially arranged exclusive visits; a study day at the National Gallery; 3 gourmet dinners with local fine wines; 2 private wine tastings; a private concert at the Villa Mosconi Bertani; lunch with wine at the Villa Valmarana ai  Nani; porterage; gratuities; receiver headsets to listen to guide/lecturer from a distance; tour notes; reservations and all entrance fees in the itinerary. It does not include meals other than those indicated; travel to and from UK airports; insurance and personal spending.

This is a sample itinerary of a recent tour. Join our mailing list to stay in touch about future tours.

Every detail was organised and communicated with the lightest touch and the detail, context and history of what we were looking at was explained with the confidence of considerable scholarship. Your highlights, carefully paced during the trip, created memories we shall treasure”

If you have any questions please send us an email

Visit the bookstore for a list of recommended books and products.